Government yet to decide what to do with axed Auckland cycle bridge funds one year on.

Use some of those funds for a National Cycleway bypass that routes cyclists from Devonport Wharf to Half Moon Bay Wharf via Waiheke. It’s almost all ready to go, just needing a few upgrades to remove it from running along main roads, providing a much more interesting route for travellers, as well as safer access for school children.

In 2012, this proposal presentation was made to the Waiheke Community Board of Auckland City Council.

In 2013 it was presented to the Waiheke Local Board of Auckland Council, the Super City

On 25 August 2019, it was presented to the CCO Auckland Transport in response to the Waiheke 10 Year Transport Plan

While changing the private sector to take up ebikes was rapidly accomplished by introducing mid-mount kit motors on Waiheke (that spread like wildfire), when it comes to working with bureaucracies, they are opaque and challenging. One must keep on hammering away… 11 years and counting.

In the meanwhile, Auckland Transport will be spending $660,000 to lower the posted speed limit on 90% of Waiheke’s roads, ostensibly to protect vulnerable road users including cyclists. It is proposing to upgrade arterial and principal roads to make them safer for cyclists – and in doing so will put drivers and shop owners against cyclists and cycleways. That kind of money could have gone far to create best-practice cycle roads on Waiheke.

Adding cycle lanes to arterial and principal roads does not follow best practice. Instead best practice (from the EU) calls for cycle roads that are

On Waiheke, this would mean two principal cycle roads

Route 1: Ferry via Schools to Ferry:  a national cycle trail that bypasses the Harbour Bridge & CBD via Waiheke ferries (Matiatia to Kennedy Point)

In this map, the blue needs cycle route signs only. The pink shows recommended upgrades of existing tracks and the red suggests, if funds are available, that a boardwalk like the one in Westhaven is placed along the foreshore.

On arrival at Matiatia Wharf, signpost Cycle Route 1 through the carpark, past the Harbourmaster  (Ahipao) to the old farm track that runs to Church Bay.

Pave this track as a cycle road shared with pedestrians and horses.

INVESTMENT: Engineering, water channeling, grading and paving. But it will eliminate the need to remove car parking from Ocean View Road and the widening of the arterial access from Oneroa to Matiatia Wharf 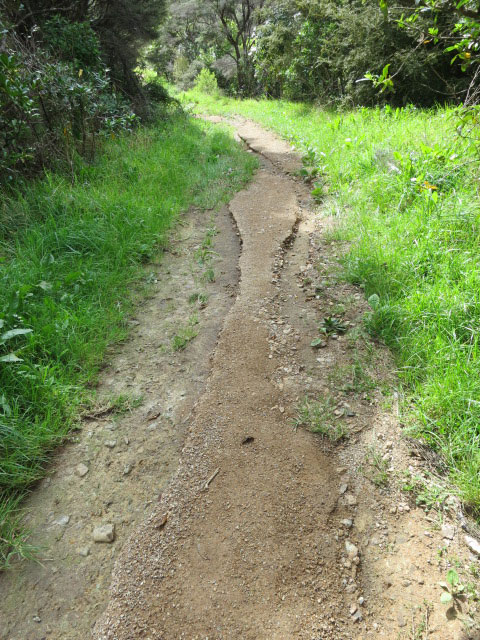 At the end of The Espalande where the road turns inland on Tui Street, there are four posts that appear to have been placed to bridge the seasonal stream to allow the foreshore track to cross in front of the Historic Blackpool Cemetery and reconnect with the paved Esplanade.

INVESTMENT: Engineering and carpentry. When the local board investigated this, they were quoted $50,000 of which $48,000 was for engineering. This seems excessive given that it is obvious what is required and could be done by carpenters in a day. Span with heavy H5 300×50 timber, deck of 200×50 H5 timber, side rails to code and timber ramps on either side. Design the ramps with strong hinges so they float in flood conditions.

AESTHETIC: View the Pony Club, Piritahi Marae in the distance, the historic cemetery and the foreshore, especially the Esplanade around the headland.

SCENIC: Signpost Piritahi Marae with an explanation of its story and tikanga for visitors

Near Lannan Road, the Esplanade becomes a foot path near public toilets. Cyclists have already made this a linkage, but it needs to be properly upgraded and signposted. 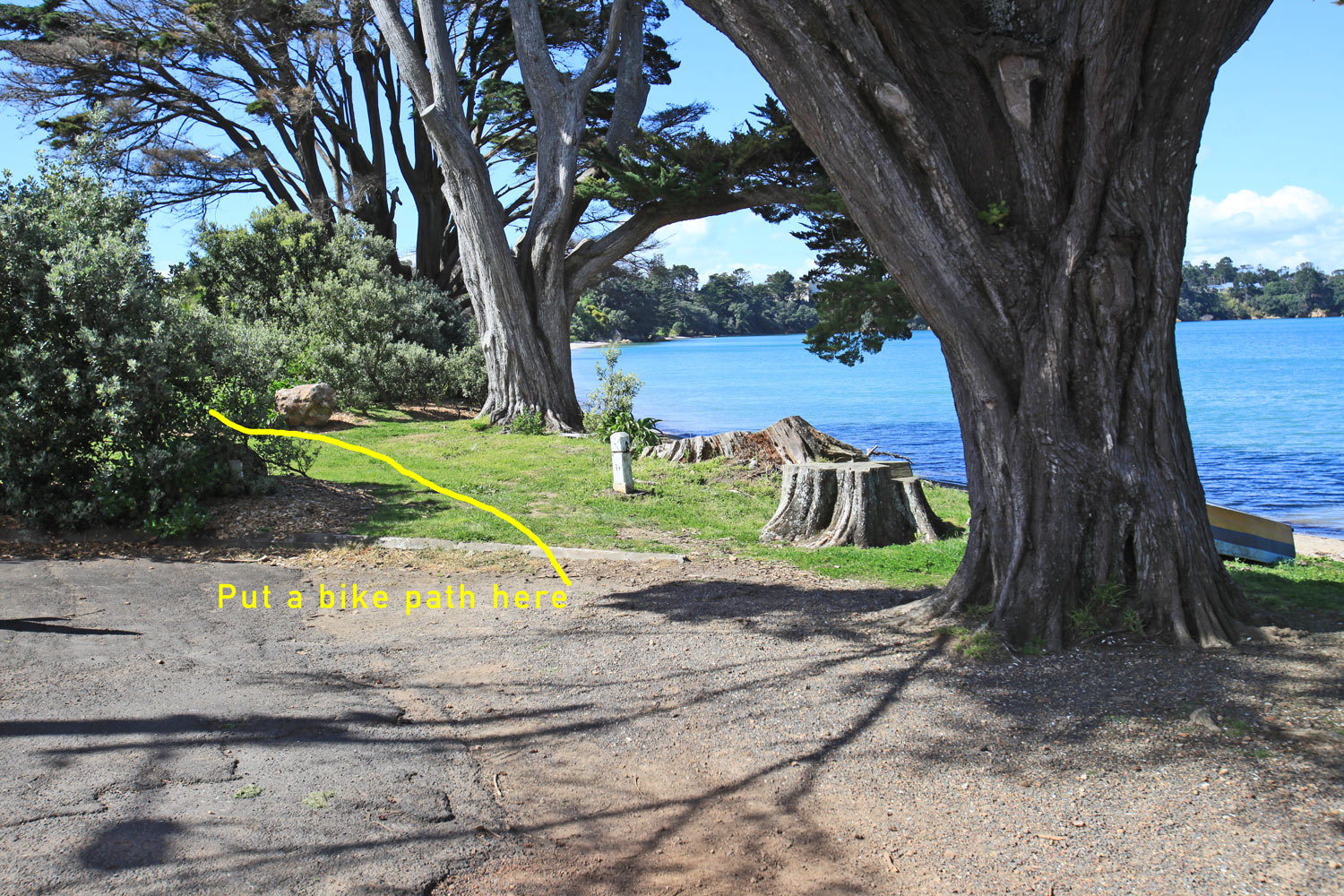 Connect to the Schools & KP Ferry

It is unclear how much of the foreshore is publicly owned and how best to route this part of the cycle trail. It may be the road can be run along the foreshore through Mitchell Reserve toward Hooks Lane. Or it may require an elevated timber crossing along the foreshore similar to the cycle roads through the Devonport Wetlands or at Westhaven near the CBD.

The alternative is to signpost through Surfdale via Blake Street, which is undesirable because this is the Waiheke arterial, or possibly to connect to the end of Mitchell Road by the Mitchell Reserve.

Rejoin Donald Bruce Road and signpost to KP Ferry. It appears at this point, the cycle route must be adjacent to the road. Separation is desirable, but this is a road that has irregular use – busy at ferry time and school start/end.

ISSUES: The High School may have security concerns, and it may mean erecting a security fence so cyclists transiting the school grounds are kept to the cycle route. 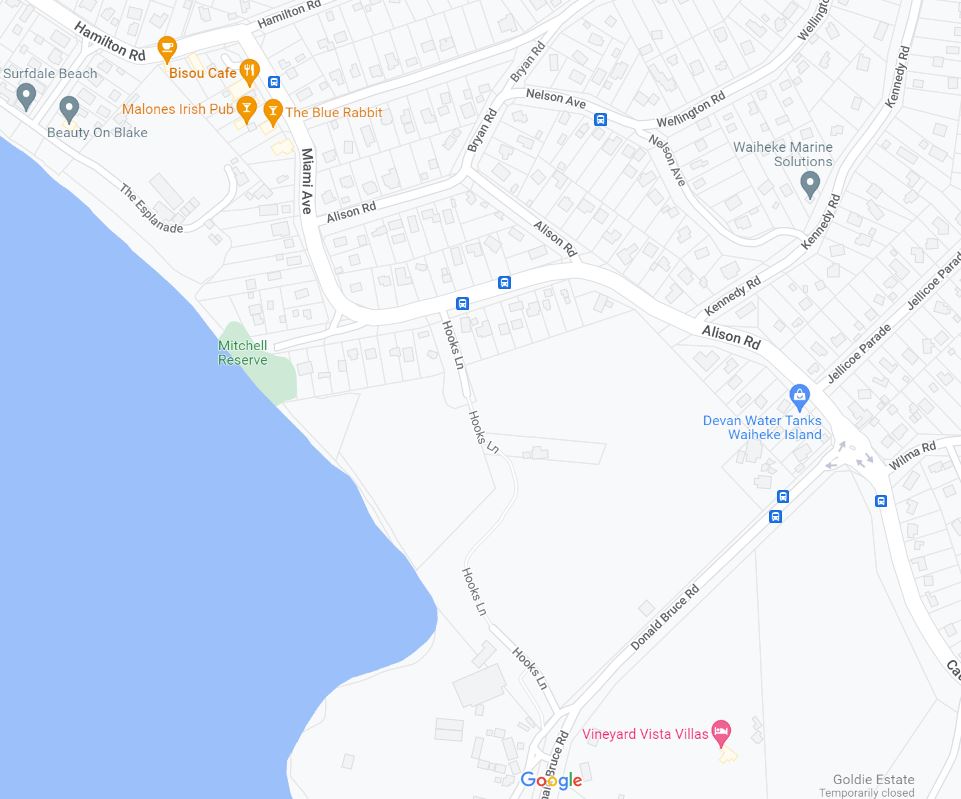 This route avoids the Donald Bruce Road Roundabout. It will require negotiations with private land owners, most notably the landowners between the High School and Goldie Estate to secure permission to have the cycle road cross their land. Generally this is best secured by a permanent rates rebate in exchange for a cycling right of way.

Near the entrance from Goldie Estate on Causeway Road, mark a cycle road crossing to the existing cycle lane on the northern side of Causeway Road. Improve it and make clear it is a two-way cycleway that has shared use with pedestrians and the very occasional horse rider.

The Causeway has an existing two-way cycle lane that needs to be cleaned up. Route 2 should then exit the arterial at Putiki Road and not rejoin the arterial until Belgium Road intersection with Ostend Road.

This next segment must run along the arterial, thus it should be upgraded until it picks up the already suitable south side cycle lane near O’Brien Road. At that point there is an existing equestrian trail that runs parallel to Onetangi Road. That trail should be paved and upgraded to a shared cycle lane because it runs the full length of the Onetangi Straight, but is physically separate from the road.

Avoid the dangerous arterial curve near Waiata Road by using the local roads and coming out by the Four Square, after which the arterial is safe to the beach.

Negotiate Right of Way: Through Villa Villas and Goldie Estate 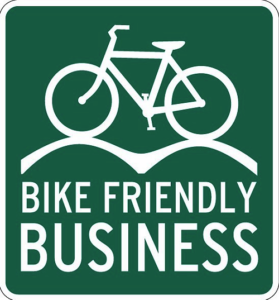 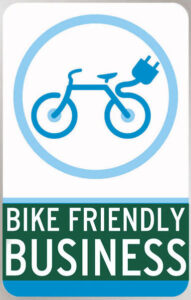 And they are OK with patrons in cycling atire

These are best at restaurants where patrons stay for a while.

Do not use the Ocean View Road arterial from Mako Street to the Library because it is dangerous. Instead, sign post the paved foot paths through Alison Park as shared space, and widen them where cyclists would otherwise pose a hazard to pedestrians, especially dog walkers.

Access to Surfdale presents a problem because there is not good linkage from the proposed Cycle Route 2 to the business district. However, there may be a private business that would be interested in providing a right-of-way for a rates concession. The alternative would be to come in from Mitchell Road, if linkage can be provided to the foreshore route.

The wooden raised footpath to Countdown would work, subject to permission.

Visitors mostly come by Fullers Ferry because Fullers takes bikes, including ebikes, free, subject to capacity. Visitors need signposts and safe routes that show off the best of Waiheke. Visitors are an important part of the Waiheke local economy, and the cycle trails should be designed to invite patronage.

Ferry Commuters are locals who cycle to work in Auckland during the work week. For them, it would be helpful if Fullers (with AT support) upgraded the ferries so the bikes do not get salt sprayed, and to increase capacity to get more cars off the isthmus roads.

Local Commuters and Shoppers are locals who work or shop in the villages and the countryside businesses such as the restaurants and vineyards. They need safe, connected routes and more covered parking in the villages.

School Children need routes that connect from the western end of the island to the schools and from the east as far as Onetangi. They need safe, well maintained routes so parents are OK with their kids cycling to school.

In Devonport, the cycle route avoids the main road. Instead it is signposted through quiet neighbourhoods (a bit boring, but safe – and not well signposted for the first time through) and then crosses an exquisite wetland with a raised wooden cycle/pedestrian footpath. It is beautiful and educational as the rider experiences the wetland without damaging it.

In contrast, on Waiheke Island, Auckland Transport builds the cycle lanes along the arterials where the only protection is a sign and road paint. It’s not an enjoyable experience with the noise, the exhaust of clapped out cars and diesel trucks, and worst of all, at the most dangerous part, it just stops. No destination design in the plan.

So what’s the alternative? As it happens parallel to the Onetangi Straight is a horse trail built by the council back when there were a lot more horse riders on Waiheke. It would take nothing more than a few signs and removing the on-arterial paint/signs to greatly upgrade the safety and experience. A little more money and it could be smooth paved. Likewise, as proposed with the school hub, the ferry-to-ferry route can go through Don Chapple’s reserve and along the beautiful foreshore instead of parallel to Waiheke’s busiest road.

In Europe, this is a basic design principle of their 45,000 km of cycle roads. It would be a great idea if Auckland Transport actually educated itself as to best practice rather than reinventing the wheel. 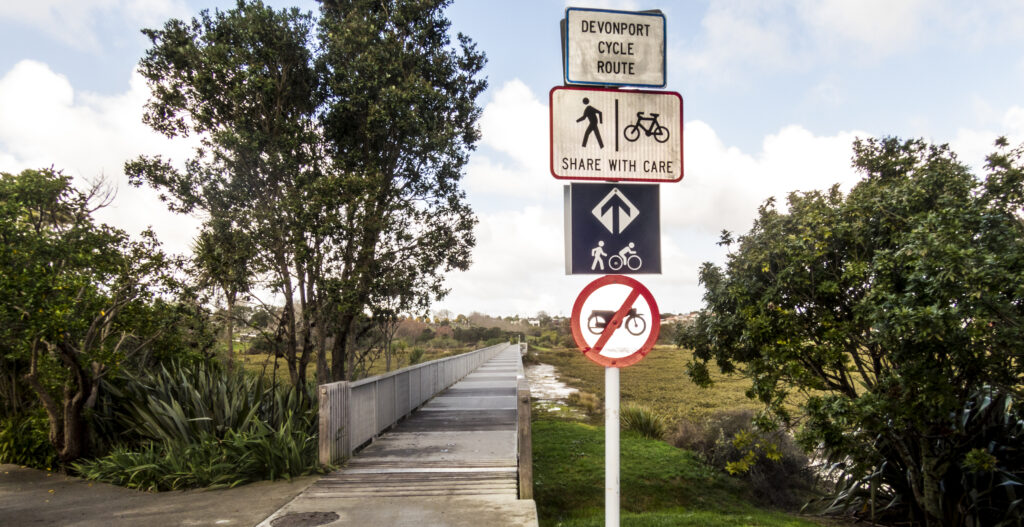 Pinch points are barriers in the road that force cyclists into traffic. They can be fixed by cutting out about 1 m between the curb and the pinch point so the cyclist can stay to the left, out of traffic flow.

The photo above is near the St Johns Ambulance. At least it is convenient to collect the cyclist hit by a car at the pinch point. 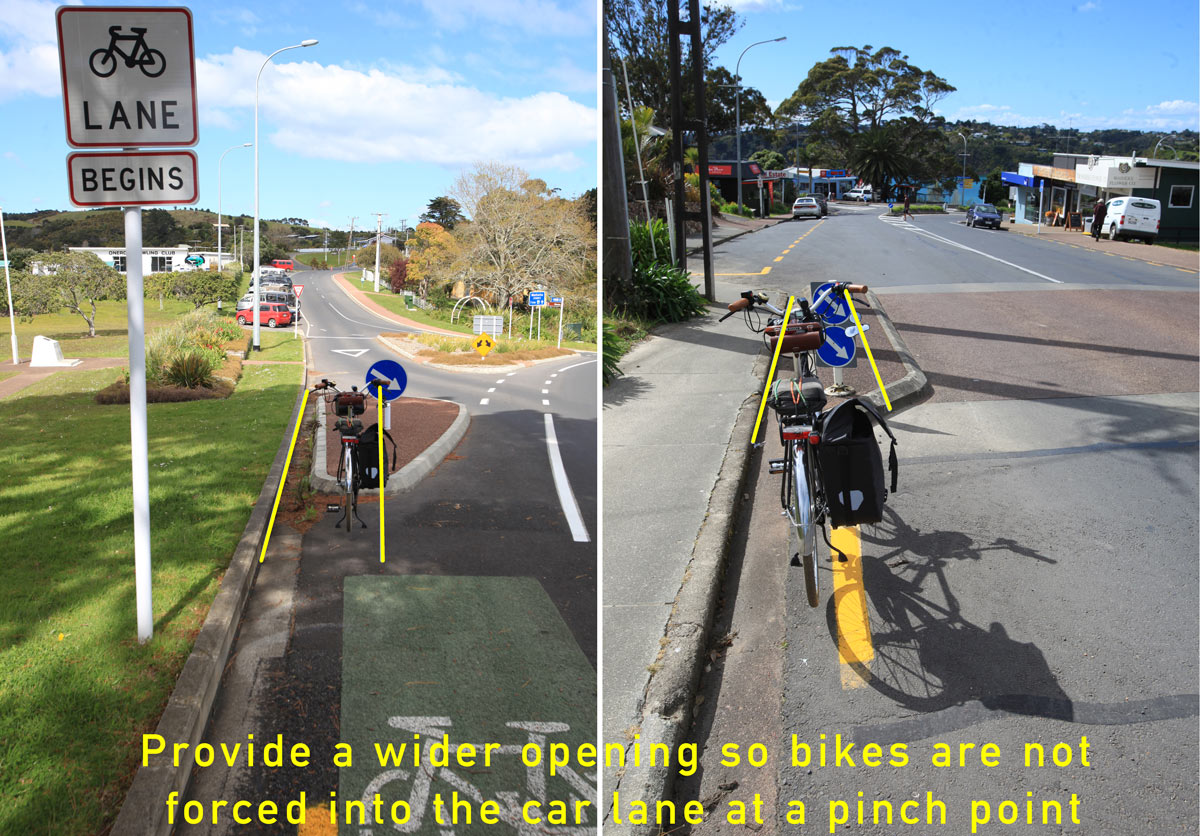 The first best-practice principle of cycle roads is “Continuous, long distance paved routes that facilitate reasonable cycling speeds“. On Waiheke there are numerous examples of where Auckland Transport planners seemed to have been obvious to this most fundamental principle. It is more dangerous to have a cycle lane that quits halfway than to have no cycle lane at all. With no lane, the cyclist knows they are on their own, and some will opt to not proceed. But when the lane just quits halfway, the cyclist is already committed, thus they keep riding but now with trucks and cars passing much closer.

As a cyclist rides toward Onetangi in the Onetangi Road cycle lane, shortly before the curve, it just ends at a private driveway. What were the Auckland Transport planners thinking? However, the solution is not to spend inordinate amounts of money widening the road (to motor vehicle standard to carry the heavy weight of trucks). Rather it is to notice on the right there is a little-used equestrian trail that runs the full length of the Onetangi Straight. As grazing land becomes scarce and horse riders move away, equestrian trails are used less and less. It makes sense to make them shared space. Pave them and signpost them for cyclists, pedestrians and horses.

This dropout west of the causeway is very odd. It just quits at a power pole. And, it is signposted as one-way, but lower down whilst crossing the water, it appears to be a two-way cycle road.  It also shows poor footpath maintenance with vegetation growing into the right-of-way.

If the cycle lane is supposed to be on the other side of the road coming from the roundabout, then there should be a signposted and road painted cycle crossing to show cyclists and motor vehicles of the crossing. It also should be for two way cycling, meaning either one lane on each side of the road, or a two-lane cycle road along side the motor vehicle road, with suitable separation.

In this particular case, it is advised to avoid this part of the arterial completely, and rejoin it at Goldie Estate. In other words, don’t fix it, bypass it.